Alumna Showcases Design for the Whitney Museum of American Art 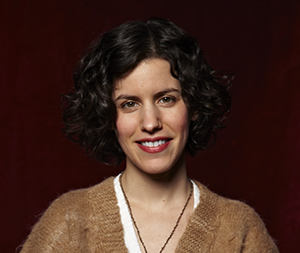 Hilary Greenbaum, a Communication Design Alumna from Carnegie Mellon University’s School of Design (2001), serves as the Director of Graphic Design at the Whitney Museum of American Art in New York City.

“An average work day will contain five scheduled meetings, three impromptu meetings, sending and receiving of 50+ emails, 3+ phone calls, 3+ hours of hands-on designing, 1+ hour of project management, three inept attempts at making a joke, one successful joke, 4+ cups of coffee, and if I’m lucky, one really good idea,” said Greenbaum, who has served as director since 2012.

All of the work, coffee, and good ideas have paid off for Greenbaum and the designers at the Whitney. Her team just launched design.whitney.org, a new website which documents the work of the museum’s Graphic Design Department. 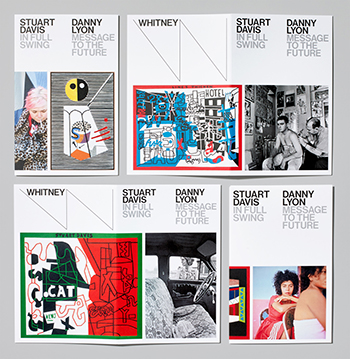 “The site covers much of what we have done for the last five years, and includes not only photographs taken by us, but also from our followers on social media,” said Greenbaum. “Our hope was to make our work more transparent to the design community (and help demystify what it means to work in-house), but also to show how the voice of one institution can carry across many different formats and platforms (through our own viewpoint and from the perspective of our visitors).”

Within the context of a museum, good design is vital towards building a brand along with supporting a visitor’s experience. 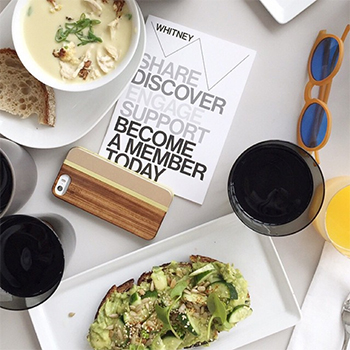 “Within the building, the work we do at the Whitney helps give context to the artwork that is on view,” added Greenbaum. “Outside the building, through the various materials that are produced with the institution’s graphic language (including advertising, promotional materials, invitations, branded merchandise, mailings, publications, as well as whitney.org among others), our department helps identify and distinguish the Whitney within the cultural landscape of New York and beyond.”

All of the projects on design.whitney.org are produced in collaboration with their many colleagues throughout the institution, and when noted, with the support of external partners. The website can be easily searched between “Ours”, photos taken by the Whitney, and “Yours”, photos taken by visitors, and posted on Instagram.

“My favorite part of the site is seeing the how each project can stand on its own, but simultaneously map back to the greater narrative that has formed when seeing them all together as a group,” added Greenbaum. 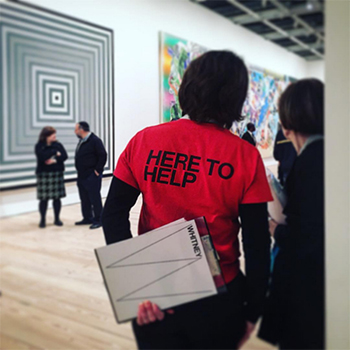 Greenbaum remembers her time fondly at the School of Design, particularly in classes like Color Theory with Mark Mentzer, Photography and Photo Book Design with Charlee Brodsky, and Typography with Karen Moyer.

“Typography is the foundation of my design practice, and I can thank Carnegie Mellon for providing me with a strong foundation in it,” concluded Greenbaum.

“Carnegie Mellon’s design program produces designers with strong conceptual thinking, solid typographic skills, and an appreciation for technology as a platform where design can provide both the structure and the polish.”