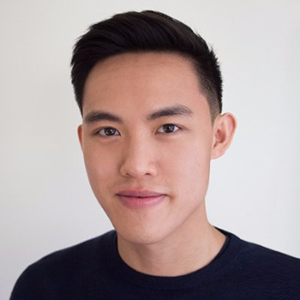 “What’s the one job you would drop everything and do right now?”

This was the question posed to Carnegie Mellon University’s School of Design Alumnus Victor Ng (BFA 2012) while he was working as a designer at a tech company in San Francisco. Ng was out with friends when someone asked him that question.

“My answer was always to work for Hillary Clinton,” said Ng.

“When I was a junior at CMU, I hadn’t come out to my family yet. A high school friend sent me a video of a then Secretary of State Hillary Clinton delivering a speech in Geneva, Switzerland,” continued Ng. “In it, she echoed her most famous speech by declaring that ‘gay rights are human rights, and human rights are gay rights.’ It was a moment I recall often and started me down a path that eventually lead to working for Hillary herself.

“So when a tweet went out from her account in April of 2015, I knew this was my once-in-lifetime opportunity. I quit in June and was working in the Brooklyn headquarters by July.”

From July 2015 through November 2016, Ng served as the Web Design Lead for the Hillary for America campaign. He describes the opportunity as the single greatest privilege of his life. 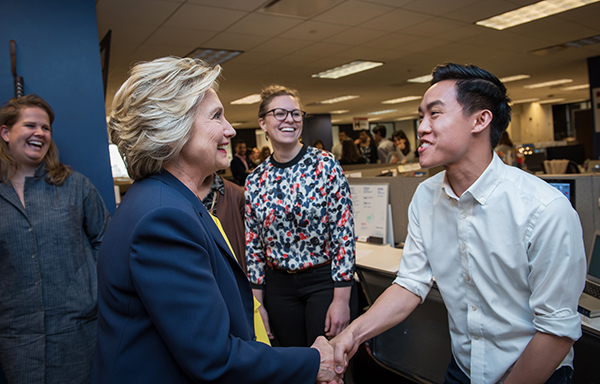 “I worked harder and designed more work than I have ever done in my life,” said Ng. “If I were to compare it to my time at CMU, it would be like finals week, but every week for a year and a half. More importantly, though, was my exposure to the passionate, brilliant, and dedicated staffers who propelled Hillary Clinton towards her historic nomination and her winning the popular vote. I learned policy from the country’s best policy experts and community organizing from the most seasoned campaigners.” 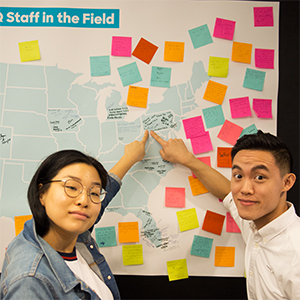 It turns out the pace of the campaign was Ng’s favorite part of the experience, even though he notes that’s “a bit twisted.”

“We worked long hours every day, 7 days a week (though on Sundays, we got to come into work an hour later),” noted Ng. “We knew there was a clear end-date: November 8, 2016. Everything we did led up to that. The work we were designing was seen and used by the millions of volunteers and voters around the country. Everyone was glued to every pixel that came out of headquarters. At times, the pressure seemed overwhelming, but looking up at your team would remind you of the reasons you joined. It’s a bit of a blur now, but my fellow campaigners became lifelong friends.”

Designers play important roles in political campaigns. Ng notes that a question he and other designers on the campaign often get asked is “Does design matter?”

“While our opponent won with ‘bad design,’ he also won with bad policies, hateful rhetoric, and a divisive campaign,” said Ng. “I kept thinking back to a quote by Herbert Simon that Dan Boyarski shared with our typography class that the act of design can be ‘(devising) courses of action aimed at changing existing situations into preferred ones.’

“As long as there are candidates who run on the idea of finding common ground and progressive policies that help all Americans, there is a place for designers. At our core, designers strive to take complex situations and reimagine them to be more accessible and useful.

“No amount of division can change that.” 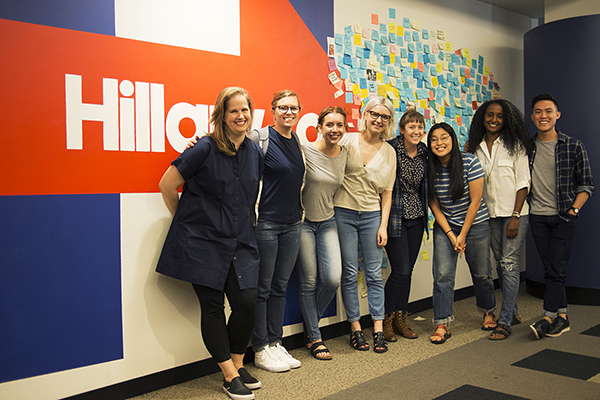 Although the outcome of the election was not what Ng would have hoped for, he’s said he’s found focus in encouraging designers who’ve expressed interest in progressive politics to pursue a career in it.

“As elections and campaigns become more sophisticated, there will be a growing need for people who can help communicate complicated issues into content everyday Americans can understand,” said Ng. “Designers fill that role.”

“It’s a relatively new team for a 165 year old institution,” explained Ng. “I spend most of my days working on brand strategy and art directing digital design work. Some days, this means running a brainstorm and getting teams to think creatively about challenging problems. Other days, it’s working with designers to fine-tune typography and direct photo shoots. I wear many hats, and that’s the best part.”

Ng credits his education at the School of Design for preparing him for his career.

“My time at CMU was incredibly formative,” said Ng. “Recently, I taught a graphic design course in the SVA MFA Interaction design program. One of the first exercises I gave my students was to kern their names. I remember doing this in Dan Boyarski’s class, where this simple activity changed the way I looked at letters forever.

“During my senior year, I took Dylan Vitone’s “Pieces” class,” continued Ng. “It was the most intellectually challenging, and in some ways self-reflective, design course I ever took at CMU. In all of my jobs, I’ve had to wear many hats and Dylan’s class started my curiosity in the role of a designer.

“Designers who graduated from CMU have a strong reputation in the industry, particularly in a time when design and technology are so interdependent.” 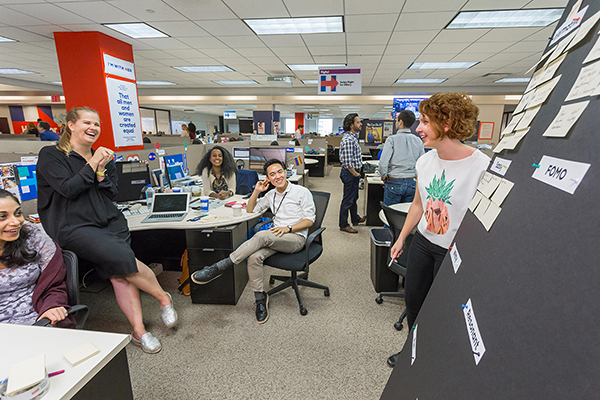 But would Ng ever work for another political campaign?

“I would do it all over again, because this work is necessary now more than ever,” said Ng. “It changed my perspective on how hard I can work and how much work is left to do in fighting for what we believe in.

“It was an amazing experience, but not a pace or lifestyle I could see myself sustaining for long. But the election outcome changed things for me. I don’t think I’m done yet. Now, my focus is on encouraging designers to help in local elections in 2018.

“We have a real opportunity to make a difference.”

Learn more about Communication Design at the School of Design >>