Bruce Hanington Begins Tenure as Head of the School of Design 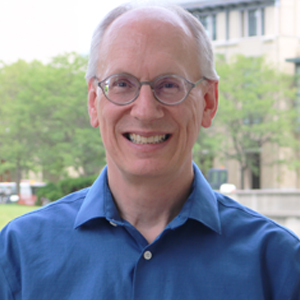 On June 1st, Bruce Hanington, Associate Professor and former Director of Graduate Studies at Carnegie Mellon University’s School of Design, began his tenure as the new Head of the School of Design.

“As a kid, I wanted to be an architect. I was always drawing floor plans and designing houses,” said Hanington, who co-authored Universal Methods of Design: 100 Ways to Research Complex Problems, Develop Innovative Ideas, and Design Effective Solutions.

At a young age, Hanington was immersed not only in his own world of design, but also that of his father, who was a commercial artist. “I could always see design happening around me,” he recalls. Later on, Hanington continued to pursue his passion for architecture and design by taking drafting classes in high school and working as a draftsman in a gap year between high school and college. Once in college, his desire for a liberal arts education inspired him to pursue a BA in Applied Psychology from the University of Calgary, with a specific focus in industrial psychology. His undergraduate studies sparked a new and ongoing interest in human factors, ergonomics, and wellbeing at work, which ultimately led him to enroll in a Master of Environmental Design in Industrial Design from the University of Calgary. By then, his early passion for designing everyday spaces had manifested in a new passion for designing everyday things. “I was overwhelmed by the scale of architecture, whereas industrial design allowed for the design of objects and consumer products that you can literally get your hands around and encounter every day,” he said.

After graduate school, Hanington wanted to spend some time working in industry, but fate intervened. “I always wanted to end up in academia, but I didn’t start there,” he notes. His search for jobs related to human factors, applied psychology, and industrial design was sluggish and tedious, prompting him to pursue his interest in academia and research. One day, he saw a small classified ad in the back of a magazine for a faculty position at Carnegie Mellon. On a whim, he applied, late in the hiring cycle, and was offered a job in August of 1998.

Hanington’s first few years teaching at CMU unearthed many unexpected opportunities. He enjoyed interacting with the highest caliber of faculty and students and appreciated the exposure to so many new people and ideas.

“The world of opportunity that opened up just by having the CMU affiliation was remarkable,” said Hanington. “I was exposed to so many connections, conferences, and international partnerships. I was able to see almost every continent in the world.” He reflected upon one particular occasion, where he and Eric Anderson, current Associate Professor at the School of Design and Associate Dean of the College of Fine Arts, drove together to visit and talk to design icon Liz Sanders, who was “simply an abstract concept until that moment.”

As an industrial designer by training, Hanington sees the world through the lens of products. “I’m really interested in mundane everyday objects - doorknobs, signs, toilets,” he says, “not just in their engineered sense, but what decisions were made in designing them, what behaviors and interactions they afford, and what simple use or manipulations of these objects change about an experience.”

Beyond industrial design, Hanington is also passionate about teaching design methods. His book, Universal Methods of Design, co-authored with Bella Martin (MDes ‘04), targets both students and those in professional practice and helps them understand design methods in a concise, meaningful format. While the first edition of this book was published in 2012, he is working on an upcoming expanded edition, which will include 25 new methods. “In the first version, we really stretched to get to 100, but the field has evolved so much that this time, we had to really work to narrow down to 25,” he says. “The surge of design research methods that are gaining credibility and prominence is quite astounding.” The expanded edition is also collaborative in nature. Hanington called upon field experts ranging from professors, PhD students, practitioners, and CMU alumni to write chapters on topics such as futuring, transition design, civic design and policy, service design, and brand experience. He stresses the importance of an interdisciplinary approach as the visibility of design methods spreads to industries beyond design.

In this vein, Hanington also believes in the importance of teaching design to non-designers. There is much potential for design to be leveraged in other industries and he is dedicated to helping individuals and companies “break out of linear modes and hierarchical processes of thinking that are holding back creative innovation.” To this end, Hanington is involved with the Executive Education team that hosts design workshops with corporations, non-profits, government agencies, and other CMU schools such as Tepper and Heinz. 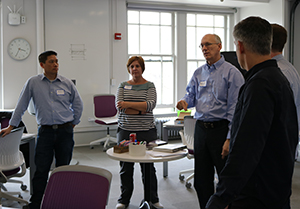 “What Terry established is at a pivotal moment and it’s no small feat to ensure that the School is poised for continued and sustainable growth,” he says. As one example, he wants to support development of the CMU Design Center. In line with his values of educating non-designers, he believes that the delivery of design courses across campus is important. He also wants to expand the Executive Education initiative, as well as increase research collaborations and sponsored projects with corporations and nonprofits. Finally, he aims to fuel sustained growth of the Transition Design Institute under Terry’s directorship, supporting a college-level, trans-disciplinary initiative with an international network of partners.

Hanington is also directing attention to school-wide work-life balance. He recognizes that the School of Design can be a stressful place to be and wants to explore options to mitigate this stress. He plans to address the frantic pace of work that happens and explicitly foster more time for experimental play, expression, and reflection. In designer terms, he is interested in the following challenge: “How might we redesign the way we conduct research and educate students to allow for more enjoyable ways of engaging with work in order to produce more creative work with less stress?”

Another aspiration that Hanington has is to continue making the School of Design a more inclusive, diverse place that accommodates the increasing student interest in design for social impact. Specifically, he plans to broaden career placements beyond the technology space. “We are starting to see it already, but I would love to see more alumni working in sectors such as education, healthcare, government, and other social sectors,” he says. Additionally, he intends to continue to expand faculty searches that attract and retain excellent staffing for core areas of expertise, as well as student searches that maximize diversity in the school.

“This is an incredible opportunity I have been given, following in the footsteps of Terry Irwin and heads before her, to build on the established foundation of a school with such a prominent international reputation, and to see it through the next phase of evolution and growth,” said Hanington. “I already feel richly rewarded by this appointment, and am excited to give back to the School, alumni, and design community beyond, that has supported me through 21 years of faculty service.”

The School of Design's Stacie Rohrbach, will be giving a keynote at LXDCON '21, starting on April 20th.

Please join us for another edition of our Design Lecture Series with James Todd and his lecture "What is Work" on April 26, 2021 at 4:30pm EST.