Lauren Zemering, an alumna from Carnegie Mellon University’s School of Design (BFA ’17), recently launched Conscience Form, a design firm dedicated to socially responsible design. Based in Amsterdam, Conscience Form operates on the belief that through designing responsibly, in seeing the world holistically, and by tackling problems empathetically, they believe they can create a future in which the living world and material world complement each other, and one in which people are happy and healthy.

Shortly after graduating from CMU, Zemering began working as an independent design contractor in Pittsburgh, PA, working with Platypus to redesign three of their autonomous boats that analyze water data. 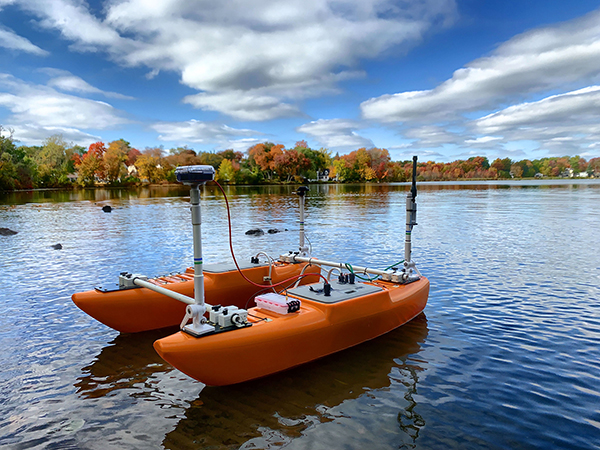 “This was a project that would last a bit into the summer, so I decided that I would stay in Pittsburgh at least for a few months after graduation to work on this project and apply for jobs,” said Zemering. “Then around graduation time I received a phone call from Bernie Lynch of Strategic Development Solutions, a local consultancy, inviting me to work on an information design project involving a redevelopment proposal for part of the Dallas County Community College District. The project ended up being the establishment and build-out of Factory Unlocked, a small-batch manufacturing/co-working facility on the North Shore.

“I worked with Factory Unlocked until June of 2018, at which point I decided I would move to Amsterdam to be closer to my family, get back in touch with my Dutch roots, and discover the next steps in my career path. I knew I wanted to do something that had a positive and meaningful impact on people and the world, but wasn’t sure exactly how yet.”

After having moving to Amsterdam, Zemering got her Dutch language back up to speed and spent a lot of time on friends, family, and further developed both her personal and professional values.

“As a designer, I had mostly worked with startups on projects involving new products and technology, from which I learned a lot, but I wanted to move into something different.”

Zemering decided that what she designed was much less important to her than why and for who she was designing it.

“Design has the opportunity to really make life better, as it often does, but I think that industry often uses design as a tool to optimize user experience, comfort, and efficiency while prioritizing company economic pursuits and feeding consumerism without considering its adverse effects or long term societal impact,” added Zemering. “I recently read, Designing for Society as per the recommendation of Bruce Hanington, which said that, ‘Today's societies require design practices that prioritize societal values, rather than merely addressing economic, production or consumer demands.’

“So I created Conscience Form because I want to design products, systems, and solutions that genuinely improve the quality of life in a responsible way. And while designing for the user experience is still an important aspect of what Conscience Form will deliver, there is a greater emphasis on designing for the human experience, which sees the user more holistically and prioritizes societal wellbeing at large.”

“These three areas are sectors I am really passionate about and are ones I think will add a lot of meaningful social value to life,” said Zemering.

Zemering added that designers are vital to issues and topics like these because they are “inquisitive at our core, often both through practice and personality.”

“Through questioning human behavior and learning how people interact with the world -- with products, the environment, and each other -- we can shape behavior to lead to a more desirable future,” said Zemering. “Additionally, the trade is built on a foundation of research, is typically interdisciplinary, and employs an understanding of people as they exist contextually.

“We are able to see the big picture and have the tools to break that picture down into smaller, manageable parts to develop something more favorable. All of this allows us to act as capable intermediaries, or translators almost, to take a large variety of input and synthesize it into a solution. Everything we do and every choice we make has environmental, social, economic, and/or political consequences and I think designers are equipped to take in this complexity and transform it.”

Today, Zemering still reflects on the education she received at CMU.

“I think very fondly of my time at CMU,” said Zemering. “The CMU School of Design really does feel like a family in many ways. I think the biggest takeaways from my education are an improved ability to problem solve, think critically, as well as an increased capacity to place myself in someone else’s shoes.

“Before coming to CMU I was already a creative person that asked a lot of questions, had a good eye for detail, and was constantly finding ways to improve my surroundings. But it was my design education that really gave me the knowledge, toolset, visual skills, and vocabulary to better dissect problems and put more concrete methodology behind creating solutions for and with others. Most importantly, I think the design faculty did a really great job giving our already questioning, curious, and creative minds the right questions to ask -- What is the problem I am trying to solve? Who am I designing for? Why does this need to be solved? What outcome am I hoping to get to? What is the best method to get there? etc.

“The School of Design is a place that takes smart creatives and transforms them into capable and well-practiced designers known for their strong user-experience skills,” continued Zemering. “You’ll not only have the opportunity to work with experienced faculty and passionate peers, but many others from different disciplines as well.

“CMU Design likes to push the envelope, explore, and often reinvent what it means to be a designer, and that’s definitely a journey you’ll want to be a part of.”

Design Alumna on the New Yorker and Being “IN LIMBO”