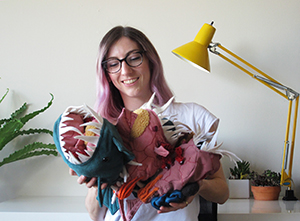 Rachel Ciavarella, an Industrial Design Alumna from Carnegie Mellon University’s School of Design (BDes ’15) who currently works within Apple's R&D team, recently launched a Kickstarter for Morris, an interactive stuffed animal that encourages you to turn him inside out and explore his innards.

Morris, who is made out of 7 different fabrics from fleece to chiffon, was originally conceived as part of a project in the Experimental Form class at the School of Design. The project prompt was to create an object that explored qualities of fibers.

“I've always been attracted to textures,” said Ciavarella. “I feel the sense of touch is largely underrated and often taken for granted. I wanted to create an object that encouraged people to experience the awesome variety in the textures of everyday materials in a new meaningful way.

“I eventually settled on Morris, a quirky twist on a stuffed animal. Stuffed animals are meant to be touched and played with. People knew right away what they were supposed to do with it without any instruction.”

“After posting Morris to my portfolio website he was quickly picked up by several blogs like Gizmodo and Notcot,” said Ciavarella. “I soon began receiving emails from people wanting their own Morris! This sparked my journey to find a manufacturer for Morris. I wanted to get him to all the people who wanted him at an affordable price.” 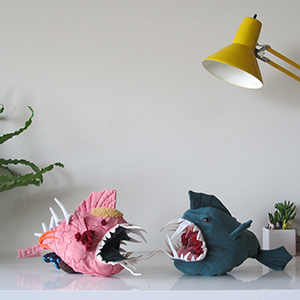 To facilitate the production process, Ciavarella is partnering with Big Idea Design LLC located in Schaumburg, IL. Ciavarella and Big Idea Design, which has already taken part in several successful Kickstarter campaigns, have been working together to select a factory, source materials and refine samples for the first production run.

If the campaign reaches its $25,000 goal, the majority of the funds will go towards placing the minimum 1,000-unit factory order and shipping the fish from the factory to each backer. The rest will be used to cover overhead costs for creating and running the campaign. Any stretch goal funds will be used to fund another limited run of Morris or to design a new reversible animal.

Morris has been a labor of love for Ciavarella, having worked on him for the past two years since her time at the School of Design.

“As far as Morris goes, it was a really a great culmination of all the skills I learned at the School of Design,” added Ciavarella. “Everything from concepting and sketching to making the first prototype, documenting the samples and crafting a great story.  Being out of school, what I miss most is being surrounded by so many talented and determined people. There's nothing quite like the energy of a studio full of students working through the night to put the final pieces in place for their projects.

“The next step was stretching myself beyond what I'd learned in school to reach out to a factory and communicate to them how to execute my design.”

So why is the fish named “Morris”?

“Morris is named after all of my dead goldfish,” said Ciavarella. “As a child, every time I got a new goldfish I would name it Morris and it would inevitably die, as goldfish eventually do. Their memories can now live on through the immortal toy Morris fish.”

The Kickstarter campaign for Morris the Reversible Fish runs through December 20th.

Follow, support and get your own Morris on Kickstarter >>