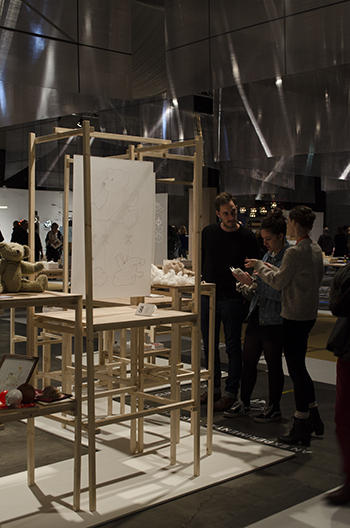 Graduates of Carnegie Mellon University’s School of Design go on to a broad range of opportunities, applying the making and thinking skills they’ve learned here to diverse areas of work. Catherine Oldershaw, a 2016 graduate of the School of Design’s Masters of Arts in Design program, is one of three designers who were selected for a designers-in-residence program in Kortrijk, a city in West Flanders, Belgium.

Designregio Kortrijk, the organization that runs the residency, advocates for design at the intersection of local government, local business, and community non-profits as a way to revitalize the economy and social life of Kortrijk through events, a maker space, the three-month residency, and a year-long design mentorship program. Oldershaw compares Kortrijk to Pittsburgh, in that both are up-and-coming cities that are refreshing and rebuilding their identities. Kortrijk’s current identity is grounded in its rich history; how could its past and present shape its future identity?

This is the third year of the three-month-long residency. Intended to foster collaboration between the three designers, each year the group is given a theme and freedom to explore any projects that spin off from that theme. The designers are encouraged to engage with the local community during the course of their project and their time in Belgium.

This year, the three designers-in-residence are working with four themes: machines, the making process, community, and sustainability. 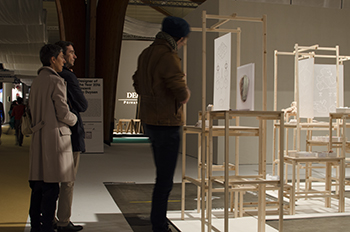 “Our concept is to have a physical space where we can collect things that can’t be donated: they have their name on it, or it’s broken, or they’re just so sentimental that you wouldn’t really want to give them away…. we are defining this as a category of things we're calling
'attic objects.' We're then giving the community the tools to transform these objects into new forms. We thought this might be an interesting way to interactively have people think about the process of how you can turn the past into the future and how that happens on a material level as well as on a social level,” said Oldershaw.

“One of the problems with recycling is that it gets sent away and it’s done on a massive scale in a really impersonal way, and it takes a lot of energy to just have it go through that process. If we can keep it at a more local, participatory scale, it might allow more people to connect with the making process.”

The designers have come up with a cataloguing process that allows people who contribute objects to follow the materials as they are unmade, organized into a material library, and made into something new again. The digital repository allows people to “keep a memory without keeping an object…. We thought this might be a way for people to have a place to store memories anonymously and still track them.”

They’ve also begun to design simple mechanical machines that participants can use for unmaking and making anew. “We are focusing on creating a local platform for making and unmaking,” added Oldershaw. “Our final outcome will be hosting workshops where people can turn materials that would otherwise end up in a landfill into usable, useful, and delightful objects. Whenever you get a product, it involves some form of destruction or some sort of unmaking before the making process…. We wanted to show that you could use old things but have them look completely different from how they originally looked.”

Their project hinges on the locality and people of Kortrijk itself, looking carefully at the community’s history, identity, and demographics to design an experience tailored to the city. In addition to Kortrijk’s deep connection to its past, Kortrijk has a large population of people over fifty years old, which shaped the design of the project as a whole. Designing something place-based for Kortrijk itself was a point of interest for Oldershaw, and while community engagement is a guideline that Designregio gives the designers-in-residence, the organization was surprised by just how localized the project felt.

Participation in the project is intentionally modular. People can donate, take apart, and remake from these materials as separate pieces of the process or participate in the entire thing if they want. Part of the intention here is to create a space that is accessible to all of Kortrijk’s population, including the older generations who may be less physically able to make. “We wanted them to be connected in some way to this making cycle without necessarily having to physically participate,” said Oldershaw. 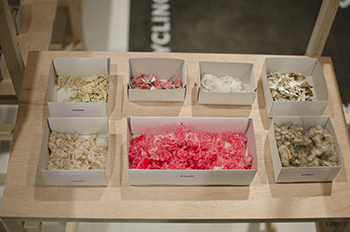 Currently, the designers are working on creating simple machines for unmaking and making from preexisting mechanical machines, like an electric blender and the open-source machines from Dave Hakkens' Precious Plastic project, for example. They hope to have their space up and running by the last month of their residency as an experiment so they can see who comes, observe their reactions, and design for issues that might come up. While this experimentation period will be facilitated, they envision the implemented space being open 24 hours for participants to use the machines at their leisure.

Ultimately, the designers hope to see this project have life in other cities as well. In addition to creating their own experimental space, they plan to create a guide so other organizations and local governments can implement similar projects. Each locality will require its own tweaks and iterations on the space, but with the guide, the designers hope to see the recycling process become more local and participatory.

“We’re also creating a guide for people to be able to do this anywhere so that when we’re done, the idea is that it’s an open system that could be implementable anywhere. In theory, with tweaks of course since not every place is the same. But giving a guideline for some community organization or even local government who wanted to deal with recycling differently: they could set this up.” 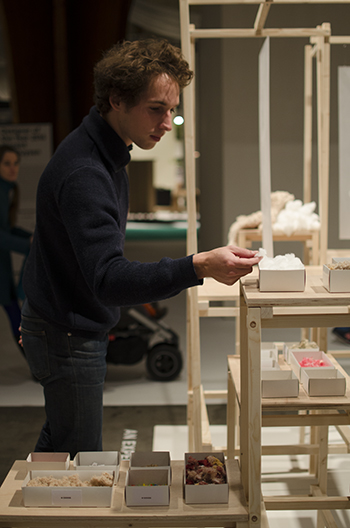 Most recently, the three designers showed their in-progress work at Biennale Interieur, an exposition mainly for interior design that took place in Kortrijk in October, to get their ideas out into the community. Their booth focused on displaying the different stages of the process that an object might go through as part of the project. Taking an almost speculative design approach, they wanted to give people an opportunity to explore the materials and process. “It was a speculative way to get people to engage with the concept of unmaking and making while we are in the process of creating our final results,” added Oldershaw.

Oldershaw refers to her education at the School of Design, in particular concepts that are fundamental to Transition Design and designing for interactions, as playing an important role in the thought processes behind the project.

At the School of Design, there is an emphasis on thinking about how physical, digital, and service components intertwine to create holistic and contextual ecosystems. Oldershaw says “both the physical and digital components allow people to experience [the process] in different ways, and both capture different elements of what’s happening.”

The discourse about Transition Design at Carnegie Mellon University provides frameworks for thinking about wicked problems and designing interventions for them. Because the residency allows for speculation and experimentation, the designers are able to explore things that aren’t easy to implement in the commercial design world. The wicked problems of materiality and waste are issues that are really difficult to approach. However, thinking from a place-based and holistic perspective has allowed these designers-in-residence to design for impact in how recycling and creation processes are understood, not only in Kortrijk but also in communities around the world.

More on the School of Design's MA Program >>