On Tuesday, Sharon Winter enrolls in Startup U.

Winter, an alumna from Carnegie Mellon University’s School of Design (BFA, ’14), will be featured on Startup U, a new reality series on ABC Family Channel that follows a group of young entrepreneurs as they embark on a semester at Draper University in Silicon Valley, led by billionaire founder and venture capitalist Tim Draper. After the semester, students pitch their ideas to a panel of venture capitalists with the hope that they’ll receive a life-changing investment to launch their business.

“I was so excited,” said Winter upon finding out she’d be one of the participants on the show. “I knew it would be an incredible opportunity for me to learn more and better myself as an entrepreneur, and an even greater opportunity for Hotpoint to enter the global market. 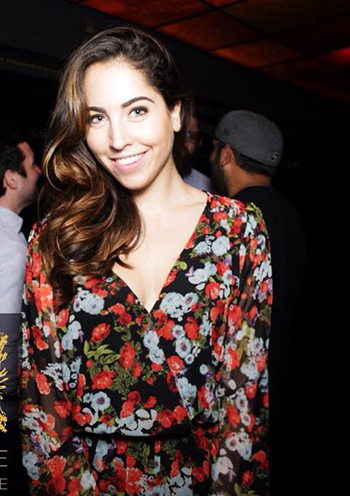 “I graduated from CMU in 2014, and it’s crazy to think that Hotpoint has come so far in just a year and a half.”

Hotpoint, the app Winter has been developing and will be pitching on Startup U, is a new social networking app with a companion video booth that is currently gaining a great deal of popularity in the Los Angeles and Hollywood markets. Hotpoint allows users to zoom in on a map to see what’s trending by viewing user-generated video in real-time.

“We have heard that we are one of the most interactive attractions a venue can have,” said Winter.

Hotpoint’s video booths, aka Light Boxes, take short animated GIFs that upload to a live feed on the Hotpoint App, broadcasting real-time at all of the trendiest venues and events. The app currently supports a nightly live-feed from 20 video booths in Hollywood, Vegas, and Miami, as well as from thousands of users recording directly on the app.

“My co-founder and I came up with Hotpoint to relieve that stress of constantly knowing what’s cool,” added Winter on the genesis of Hotpoint. “Venue vibes change from night to night and we needed something to give us a live peek inside the venue so that we could know before we go. We wanted to know the vibe, the crowd, what people are wearing, all of it.”

Designing an app like Hotpoint is not without its challenges.

“User testing was an eye opener,” added Winter. “You have to design simple and smart, because if first-time users don’t ‘get it’ you’re not getting a second chance from them.  My co-founder and I thought we knew our users so well, having been in the heart of nightlife for years.

“It wasn’t until our interns Lauren Goldstein (School of Design ’16) and Stephanie Chung, turned our Hollywood Blvd office into a R&D/UX Super Lab that we really understood what our users wanted. The challenge of navigating people through the app was a big obstacle we struggled to perfect.”

Winter credits her time at the School of Design with preparing her for the development and success of Hotpoint.

“In the School of Design, the professors you're working with day in and day out are superstars in the field and really have accurate insight as to what the professional world of design entails,” continued Winter. “Take the time to get to know them, dig beneath the surface, ask a ton of questions, and go the extra mile on every project.

“You’re in one of the most prestigious schools in the world. You’re not just in the School of Design, you’re part of Carnegie Mellon University.”

And what can viewers expect when Startup U premieres on August 11th?

“Across the entire season, we meet some of the most powerful players in Silicon Valley and get to hear their stories, tips, and tricks on how they built their billion dollar empires,” concluded Winter. “It’s incredible the difference it makes when you're surrounded by likeminded people.

“The amount of inspiration you walk away with each day at that school is un-matched.”

Startup U premieres on ABC Family on August 11th, at 10pm. Follow Sharon Winter on Twitter @sharonwinter77 for behind the scenes info during the premiere and for each episode of Startup U.

More on Startup U >>