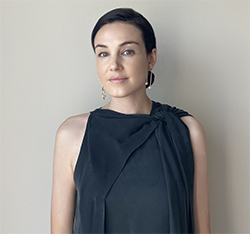 “This international design award was a huge honor and incredibly gratifying to receive in the midst of a career transition and as a newly minted furniture designer,” said Stine. “Winning this award alongside some of the designers I’ve looked up to and admired for years was surreal. My affiliation with Red Dot has allowed me to connect with environmentalists, engineers, scientists and designers from all over the world who have offered manufacturing assistance, shared production techniques, suggested ways to grow the concept, and introduced me to new materials. The eagerness to share knowledge has been incredibly inspiring.

“I’m humbled to be part of the conversation and look forward to continue learning from some of these industry leaders.” 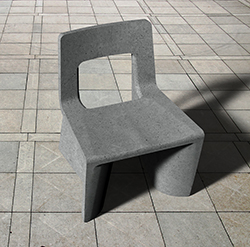 The Fly-Ash Chair started out as a hypothetical project within Stine’s current graduate program at the Savannah College of Art & Design for Emeco, a furniture design company based in Pennsylvania, known for their designs that aim for high standards in durability, sustainability, and truth to materials.

“I wanted to find a material that fit their ethos and design language while adding something fresh to their product line,” said Stine. “Having spent four years in Pittsburgh at CMU and knowing the extent of industrial production in the area, I researched local industrial waste that could be realistically procured for production. Pennsylvania is one of the largest coal producing states in the country and fly ash contamination from power plants is a big concern for local communities.” 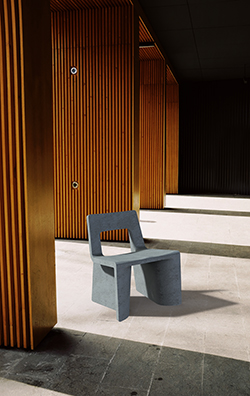 After finding that fly ash was being successfully integrated into concrete for construction, Stine realized its unique properties could also translate well to furniture.

“As a byproduct local to Emeco, it’s a logical material to utilize: a minimal carbon footprint in transportation to their manufacturing facilities requiring very minimal additional material,” added Stine. “Of course, there is a need beyond the issues in Pennsylvania. Since 2000 coal-fired power capacity has doubled across the globe. It may seem counterintuitive to endorse a toxic byproduct of an environmentally damaging process as a sustainable material, but finding immediate solutions to the waste of current processes helps bridge the gap to when we hopefully won’t have any fly ash to use.

“The chair doesn’t validate the coal power industry but instead highlights the damaging nature of it,” continued Stine. “Each chair is a physical presence of this impact. The volume of ash in each chair is approximately the energy equivalent of a 100W lightbulb powered 24 hours a day for 115 days - a direct representation of the power production necessary to yield the fly ash for these chairs.

Looking at sustainable design as a whole, Stine notes that the necessity of the chair speaks for itself.

“In this year alone global warming has become increasingly evident and manifested itself in devastating ways across the world that has affected all of us,” said Stine. “At this point, we can’t afford for sustainability to be its own entity of design. It needs to be integrated into all disciplines and industries at every level. It is our responsibility as designers to find, develop and exemplify ways to adapt.

“Luckily, there is also a growing consumer base who demand it.” 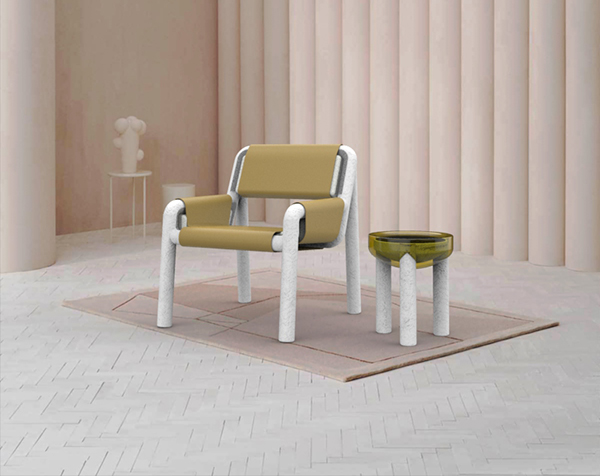 Stine's Floraform Chair - The chair is made from mycelium (mushroom root system), biosilk mesh, with mushroom leather and mushroom foam cushions. The side table is mycelium and algae bioresin. All materials are grown or formed from plant based materials and are incredibly strong and biodegradable.

Alongside her work with Emeco, Stine freelances with Anthropologie having designed a bedroom collection that will be coming out in the spring as well as some additional pieces which will be available next fall.

“The company’s spring ‘21 concept that inspired the bedroom collection is in its essence all about a modern, artisanal aesthetic,” said Stine. “The baseline sentiment for the concept is a sense of calm and self-care which really couldn’t be more relevant right now. I was able to have the creative freedom to design based on my own interpretation of this vision and the bedroom collection ended up with some nice, subtle sculptural and textural elements with an emphasis on bare and honest materials.”

For Stine, the foundations of design that she learned at Carnegie Mellon University still come up in her day to day work.

“Everything I learned at CMU has allowed me to look at solutions through a more discerning lens,” said Stine. “The design program instills the intrinsic push to not only design the object but design for its future and its relationship with the world. Furniture, for example, needs to be comfortable, it should be well engineered, it should be visually balanced, but of course it’s also important to think about its broader impact. Where is it going, who is it for, is it facilitating communication or lending privacy, what is its end life? Great design is layered and multifaceted, it looks ahead and continues to unfold as it’s used.

“CMU pushed me to design with a deeper sense of purpose and intent that I value in my work, and this mentality has ultimately led to a more fulfilling career.”

Stine’s favorite memories of her time at the School of Design include late nights in the studio with her fellow classmates and a waffle shop developed as part of a service design class. The interdisciplinary class tasked students to create and design a business in the East Liberty neighborhood of Pittsburgh.

“Driven by community opinion, engagement and research, the ultimate product was a waffle shop with late night talk shows led by people living in the neighborhood,” said Stine. “We would be there running the place from like 10pm to around 2am a couple nights a week. There were puppet shows, DJs, magicians, plays, haircuts; there were things being lit on fire once.

“It was the best kind of weird.”

“If you want a gold star or participation award this is not the place for you, but ultimately that is why the program is so valuable,” added Stine. “The program pushes students to question themselves and challenge their perception of the world enabling them to develop high level, intelligent design through expanded design thinking. The School of Design understands that great design is at the heart of positive change.

“To be a design school alum is to understand the power and responsibility of this degree to impact the world in a meaningful and productive way.”

More on the Red Dot Award >>