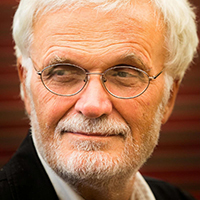 Please join us for another edition of our Design Lecture Series with Ezio Manzini and his lecture, "Being Terrestrial: A design culture for the Anthropocene," on March 4, 2020 at 5pm in Margaret Morrison Carnegie Hall room 121.

Ezio Manzini is perhaps the world's leading expert on sustainable design, with a focus on scenario building toward solutions encompassing both environmental and social quality. At the Milan Polytechnic is Director of CIRIS (the Interdepartmental Centre for Research on Innovation for Sustainability), where he focuses on innovative processes in the system of production and consumption and, in particular, on the relationship between product strategies and environmental policies in the perspective of sustainable development.

Most recently, his interests have focussed on social innovation, considered as a major driver of sustainable changes, and on what design can do to support it. In this perspective he started and currently coordinates, DESIS: an international network of schools of design and other design-related organisations specifically active in the field of design for social innovation and sustainability.

Manzini is the author of several design books, including The Material of Invention, Artifacts: Towards a New Ecology of the Artificial Environment, and Solid Side: The Search for Consistency in a Changing World (with Marco Susani). His recent book, Sustainable Everyday envisions what life might be like in a sustainable society, putting forth possible scenarios and workable alternatives.

About "Being Terrestrial: A design culture for the Anthropocene":

The Anthropocene is the geological era of the Earth in which human activities produce transformations on a planetary scale. And it is also the one in which the terrestrial ecosystem reacts to human action by changing itself in an evident way. That is, such as to create the ecological (and therefore climatic and social) state of emergency in which we find ourselves today. Therefore, in the Anthropocene, the future of the Earth, and with it that of us human beings, is also a matter of design choices. And behind them, of design culture.

To tackle these issues, Bruno Latour's recent reflection is proposed as a starting point (B. Latour, Down to Earth. Politics in the New Climate Regime, Cambridge, Polity Press, 2018). In particular, the focus is on the need to abandon the idea of progress intended as a shift on the axis of modernization, which goes from the Local to the Global. And to recognize the emergence of a third pole to move towards. An attractor that Latour describes as the "Terrestrial”, intended as a planetary living system. The discovery of the Terrestrial therefore introduces another axis with respect to which to evaluate our design choices: that which goes from the Local-Global polarization to the Terrestrial.

Design was born as an agent of modernization and has evolved by placing itself on the Local-Global axis. The work hypothesis indicated above modifies this picture and proposes to consider its potential as an agent in the new direction towards the Terrestrial. By implementing this reorientation some interesting lines of reflection emerge.

1. The Terrestrial is not the Spaceship Earth. It is a living system that we cannot guide or produce. But that we can accompany and regenerate. And of which we can and must take care.

2. The Terrestrial converges with social innovation. Its distinctive features are similar to those presented by a constellation of innovative initiatives that have emerged over the past 15 years. And that, for this reason, can be defined regenerative projects

3. The Terrestrial as an attractor of regenerative projects. In the Terrestrial perspective, these projects reinforce each other giving rise to an evolutionary process with a recognizable direction. The one that goes from the Local-Global to the Terrestrial.

4. Regenerative projects reinforce the Terrestrial. They are working prototypes that make it visible and tangible. Therefore, in addition to having an immediate social and environmental value, they are also experiments on how “to be Terrestrial".

5. The Terrestrial and the regenerative projects create a virtuous circle. The first is an attractor that can stimulate and guide a large number of the seconds. In turn, the seconds, give the first, i.e. the Terrestrial, more visibility and tangibility. Doing so they increase its attractiveness. And so on.

6. In the Anthropocene the design culture is Terrestrial. It must give the experts, and all the actors involved in the social conversation about the future, the ability to think of themselves as Terrestrial. And act accordingly.

Fifteen first-year MDes students will present their thesis ideas in the form of 3-minute lightning talks.

Please join us for another edition of our Design Lecture Series with School of Design Alumnus Dimeji Onafuwa and his lecture "A World Where Many Worlds Fit - Exploring pluriversal approaches to user experience" on March 16, 2020 at 5pm in Breed Hall.

Six second-year MDes students will present their thesis work as it comes to a close and share discoveries gleaned from their inquiry.