Especially with regards to sexual violence in university communities, attention to Title IX (a federal law protecting people from discrimination based on sex in education programs and activities) has been growing over the past few years. Carnegie Mellon has since reexamined and restructured its procedures for reporting and responding to sexual assault and relationship violence. Because many campus members are not aware of the current reporting processes and resources available to them, junior communication design students in Kristin Hughes’ junior typography class worked closely with Carnegie Mellon’s Sexual Assault and Relationship Violence Prevention (SARVP) Committee to publicize the issue with a visual campaign. 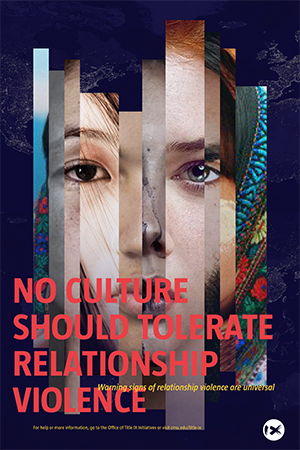 In addition to bringing attention to available resources and the reporting process at CMU, students were asked to “frame sexual assault as unacceptable, non-normal, and something for which the survivor bears no responsibility.” Students had to directly challenge assumptions and stigmas surrounding SARV while holding thoughtfulness and sensitivity towards the language and imagery. Themes of empowerment, empathy, and encouragement run throughout the students’ projects and intentionally contrast with the victim-blaming mentality that pervades much of our culture. Students also had to draw a balance between a positive, approachable tone and one that would not undermine the weight of the issue.

Beth Halayko and Momin Malik, graduate students and members of the university’s SARVP Committee, initiated this project with Hughes after Halayko took Hughes’ class on Design and Policy for Humanitarian Impact. Part of what sparked Halayko’s interest in the project was that many parts of the campus community aren’t aware about relationship violence or sexual assault and how to combat it. She points out that “for graduate students in particular, sexual assault and relationship violence is rarely addressed at all. Much of the past communication in this subject was targeted at undergraduates, as soon as they get to campus, but then drops off over time.” She and Malik brainstormed various target populations on campus the students could potentially focus on while creating their designs. 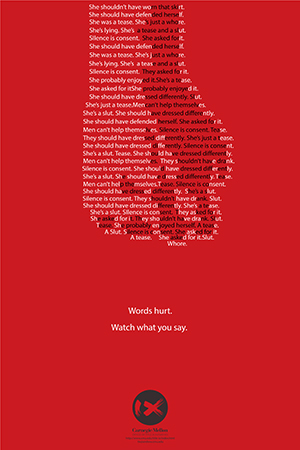 Jess Klein, the class’s main contact and expert from CMU’s Office of Title IX Initiatives, kicked off the project with a presentation about the issue and was available to the students for continued conversation and feedback throughout the design process. Communication Design junior Julia Wong said that Klein’s presentation helped her “[find] it a lot easier to relate to the topic even though previously [she] had felt more removed from it” and used a book Klein lent her with personal stories of relationship abuse, along with other resources, for first-person quotes in her campaign. Klein and the SARVP committee provided the class with plenty of reports, research, and other resources to inform the projects.

In addition to those resources, many students extended their research to include firsthand accounts of abusive relationships and the complications involved in leaving them. Kate Apostolou, another Communication Design student, reached out to and was inspired by a survivor of relationship violence, who “spoke about our culture of silence and how survivors often feel like they don’t have a voice.” Creating this level of empathy for survivors led the students to communicate an expanded definition of sexual violence. 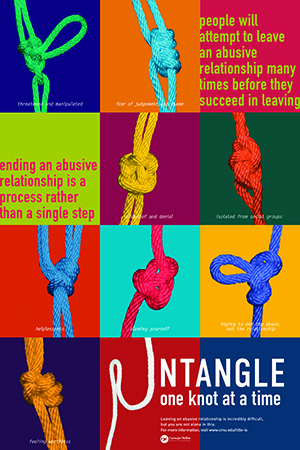 The project culminated in a presentation of the poster and video components to each students’ visual campaign. Members of the Survivor Support Network, Office of Title IX Initiatives, and SARVP Committee were in attendance at the final critique. Dr. Janel Sutkus, Director of Institutional Research and Analysis and a trained sexual assault advisor, created the Spring 2015 SARV Study that was the basis for many of the students’ projects. In response to the students’ projects, Dr. Sutkus said, “I was so impressed with their thoughtful work - each spoke about the population they wanted to address: bystanders, survivors, friends of survivors, and perpetrators - and each approach was so directly on target with the messages we hope to get across to our students, and in a way that will really resonate with them.”

Through this course and others taken at the School of Design, undergraduate students are learning about design’s role in social issues. According to Zainab Aliyu, the School of Design experience has “introduced [her] to projects with a meaningful impact and has taught [her] about the influence design can have on solving complex, universal problems.” The design process taught at Carnegie Mellon emphasizes an understanding of people, relationships, and society in addition to clear, engaging visual and verbal communication skills.

The students’ work will be used for campaigns from the Office of Title IX Initiatives all over campus for the semesters and years to come.

Design Alumna on the New Yorker and Being “IN LIMBO”