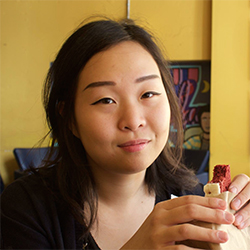 Lee’s entry is her first illustration in an ongoing series about Yann Martel's Life of Pi. Lee’s series is part of an independent study project that she has been working on with Associate Professor Dylan Vitone.

“The first drawing was more or less a grand opening, where we are introduced to the protagonist, Pi, in his home, a vibrant zoo in Pondicherry, India,” said Lee, “I remember being excited yet impatient to begin this work, as I was so drawn to the potential of how much color, life, and detail can be fit into each drawing.” 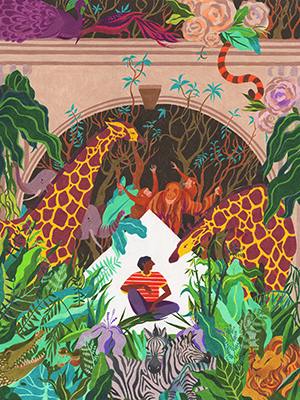 From about 8000 submissions, Pi’s Paradise is one of 150 works to be put on display in the Museum of Illustration and one of only 25 works to receive a financial reward from the Society of Illustrators, the oldest nonprofit organization dedicated to the art of illustration in America, whose members have included N.C. Wyeth, Rube Goldberg, and Norman Rockwell

“As an outsider competing against a sea of intense illustration students, I honestly didn't think I'd even make it into the show, let alone earn one of the scholarships,” said Lee about the competition. “The feeling that I had was a weird concoction of denial, joy, relief, and even sadness, maybe like how someone would feel winning the lottery after trying for so long.”

“Deborah has been working incredibly hard on her illustrations over the past couple years and it is really starting to pay off,” said Vitone. “She has done most of her illustrations on her own as part of independent studies, outside of the class room, squeezing every last minute out of the day to just create something new, something that did not exist.

“I am particularly excited by the way she is combining atmosphere and mood with narrative in her work,” added Vitone. “The worlds we get to enter into become richer by the week.

“Her tool kit is growing and so is joy of looking at her work.”

Lee has been honing her illustration skills by focusing strictly on applying drawing techniques into storytelling and artistic voice. Practicing in mock editorial and advertising contexts has helped her to create a stronger foundation in her work.

Interested in illustration since high school, Lee is glad that she chose to come to the School of Design to further her career rather than going to an arts conservatory.

“I actually came in wanting to be an animator or a motion designer, so I had my sights on the ‘Time, Motion, and Communication’ course since freshman year,” said Lee. “Needless to say, I was not disappointed in the slightest. I was excited about every project that came our way; the class taught all of us to be unafraid of experimentation, which I've been applying to my work lately."

Lee notes that not enough illustrators or animators understand how interaction and visual design can make or break the work. She thinks that her education at the School of Design gives her an advantage by helping her shape a more holistic approach to illustrating. Upon graduating, Lee will serve as an Illustration Intern for NPR.

“Part of me thinks that a primary reason of landing the NPR internship was my knowledge of grid systems, typography, motion, and everything else from the Communication Design track,” said Lee.

After her upcoming internship with NPR, Lee then moves west to join LinkedIn as a User Experience Designer and to continue work as an illustrator.

Lee’s Pi’s Paradise will go on display in the Museum of American Illustration from May 8th through June 9th.

Learn more about the Communications at the School of Design >>