Design Students Donate Work to Out of Hand Auction 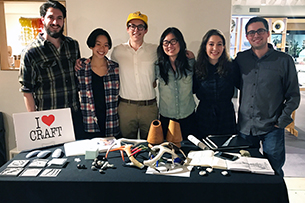 This past April 1st, students from Carnegie Mellon University’s School of Design donated their work to the Society for Contemporary Craft’s “Out of Hand” Auction. The hoedown-themed auction is the Society for Contemporary Craft’s largest annual fundraising event and it raised over $96,000 which goes to support exhibitions, education, and outreach programs.

Since 1971, the Society for Contemporary Craft has been committed to providing access to the arts and encouraging creativity and positive self-expression. They offer free admission to their location in Pittsburgh’s Strip District in order to make their exhibitions available to a wide audience and aim to make education and outreach programs that take art into communities that might not otherwise have access.

As part of their class work for their Experimental Form course, the design students visited Society for Contemporary Craft and their Store earlier in the semester to learn about the materials, process and production used by contemporary craft artists. 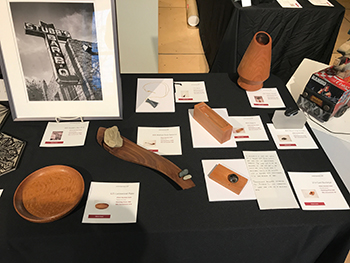 “Following their visit, I was invited to work with Mark and the students to review their final design projects,” continued Lydon. “Mark suggested that it might be a nice opportunity to invite the students to participate in the auction with their finished projects.”

“It was a really eye-opening and memorable experience,” said Adella Guo, one of the participating students. “We had our own Experimental Form table displaying some of our process and a lot of people came by to ask questions and talk to us about what we do. It put a lot of things into perspective like how lucky I am to be going to Carnegie Mellon and getting an opportunity to do such fun, experimental projects with talented peers.”

Guo’s piece was titled Walnut Rock Balance, an interactive sculpture that allows a user to create his or her own compositions by placing small rocks on a curved form crafted out of walnut wood.

“I was really interested in making something that allowed someone to place things, make their own decisions based on what they like or dislike, and simply observe their own creation,” continued Guo. “My concept was also heavily inspired by local furniture designer, Tadao Arimoto, because a lot of his work combines elements of nature like imperfection and material contrast.”

“The event was a lot of fun,” added Max Plummer. Plummer contributed a cast cement buckeye, which was inspired from his time growing up at his grandparents’ house. “It’s a special opportunity to meet Pittsburghers in the arts and crafts community, but outside of the world of Carnegie Mellon. It was satisfying to see our class contribute real value to others and to the Society for Contemporary Craft.”

Alex Palatucci contributed a 3D printed necklace titled Reza to the “Out of Hand” Auction. 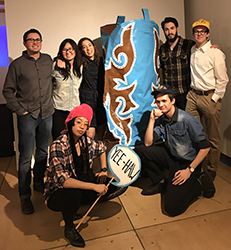 “My necklace was inspired by explorations I completed while abroad in New Zealand,” said Palatucci. “The main concept was to design a form that took advantage of the printing process in order to have a virtually finished piece right off the printer. I am interested in showing the beauty that 3D printed pieces can have because often times 3D printed prototypes are covered to hide the visible layers and texture.”

Reza actually found itself in a bidding war before the evening was over.

“It was exciting to have multiple people bidding at once and see the selling price double from the starting price,” added Palatucci. “I’m so happy that someone saw the value in the necklace because I put a lot of time into designing it, and that in itself brought me so much joy.”

The Experimental Form Studio looks broadly at the discipline of industrial design with an emphasis on creating new paradigms for interactive objects. This course encourages an exploratory study of physical objects and artifacts and provides a creative and intellectual forum to re-imagine our relationship with objects.

Learn more about the Society for Contemporary Craft >>