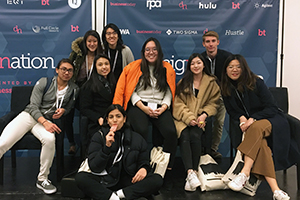 This past April, nine undergrads from Carnegie Mellon University’s School of Design were invited to participate in the 2018 Designation Conference at Spring Studios in New York City. The Designation Conference is an all-expenses-paid exploration of the versatility of a career in design, how design is applied differently across industries, and what it looks like to be a design leader facing the business and social challenges of our world.

Established in 2017, the Designation Conference is a two-day annual event that aims to bridge the gap between students in creative fields, like design, and the professionals who work in those fields.  Out of over 1000 applicants, only 100 participants were invited to attend with the biggest student cohort coming from Carnegie Mellon University. The nine students selected from the School of Design were Robert Managad, Tiffany Jiang, Marisa Lu, Aisha Dev, Sherry Wu, Matthew McGehee, Tiffany Lai, Serina Liu, and Katie Chen.

Participants took part in keynotes, seminars, and workshops led by leading design figures such as Abbott Miller (Pentagram) and Dana Arnett (VSA Partners). School of Design students had the opportunity to hear about professional approaches to designing for trust, designing for good, designing for innovation, and designing for culture in the current corporate world.

“My experience at the conference was fantastic,” said Robert Managad, a rising Junior in the Design for Communications track. “I was exposed to a spectrum of designers who worked within business and who worked with community.” 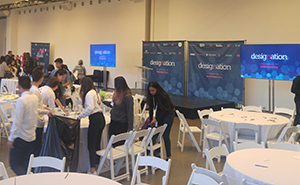 Invited professionals varied between agencies, larger companies like Google, designers who work with local governments, and those who work with international marginalized groups.

“I think it's easy to fall into a bubble at CMU, where you believe that your perception of design is relatively similar to the perceptions of other designers,” said Managad. “It was refreshing to be introduced to a wide range of beliefs that didn't align with my own. In fact, there were many moments during the conference when I felt agitated or frustrated, but I quickly realized that those emotions were healthy -- it shows that design as a discipline is rich in its diversity.”

One of Managad’s biggest takeaways from Designation was his feeling that approach to design being taught at Carnegie Mellon is far ahead of the business world. 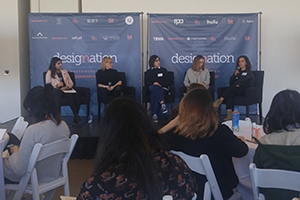 “I say that because the idea of design that was discussed during Designation often didn't go past the three factors of products, people, and business -- there was very little, if any, talk of the relationship between design and environment,” added Managad. “I think that shows just how big of a role CMU design students have in changing the corporate landscape.”

Managad, who currently works with local communities as a student and one day hopes to use his degree by developing communications that are environmentally and culturally responsible, goes on to say that he appreciates the way Carnegie Mellon has taught him to design progressively.

“Not only are hard skills related to Products, Environments, and Communications Design taught at CMU, but ways of applying those skills to larger contexts with awareness to systems are heavily pushed,” said Managad.

”Very few universities have discussions about the role of design in making changes towards a more sustainable state, and it's these ideas that are pressuring design to become a more socially and environmentally-aware discipline.”