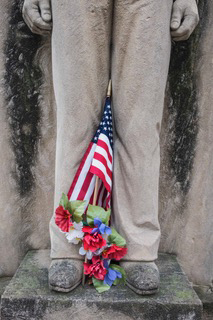 It is an undeniable fact that American politics, and politics more globally, are becoming more divisive and polarizing. Countless individuals and organizations, from grassroots groups advocating for peace to high-profile celebrities galvanizing voters, are trying to tackle these issues in their own unique way. Charlee Brodsky, a fine art documentary photography and professor of photography here at Carnegie Mellon University’s School of Design, is one such individual.

Her latest exhibit, American Patriot, which debuted on November 7th and runs through December 30 at the JCC Berger Gallery, features 66 photographs of American flags found in residential neighborhoods throughout the southwestern Pennsylvania region, accompanied by poetry by Jim Daniels.

Inspired by the political shift in this region from blue to red in 2016 election, Brodsky was motivated to better understand the people it comprised. She reflected on her earlier road trips throughout this area, which began forty years ago when she first arrived in Pittsburgh. At the time, Pittsburgh’s culture of patriotism, steel, and industry had dwindled into an economic downturn, but she met dozens of families who still prominently featured the American flag on the lawns and porches. Forty years later, she returned to explore what this symbol meant. 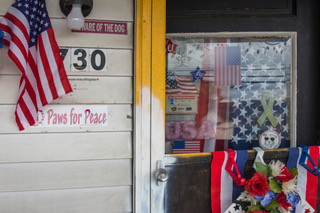 Brodksy is no stranger to exploring narratives about people through photography. Her previous books have featured subject matters such as current life in a former mill-town, life with mental disorders, and life with breast cancer. Her regional interest in the area is not new either - she has photographed the former steel town of Homestead, Pennsylvania and curated exhibitions regarding the history of photography in Western Pennsylvania.

Her current exhibit features photographs of the flag in a wide variety of contexts. Some hang in windows of houses, businesses, local government; others are planted haphazardly in porch rails, gardens, and cars; some fly majestically on poles and roofs; others are faded stickers and ribbons stuck on mailboxes and sides of walls. Regardless, one thing is clear - the flag holds weight for many people. 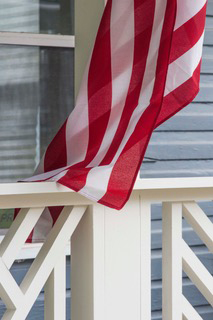 While Brodsky had a few of her own theories, such as how veterans and Republican voters were more likely to display flags, she learned through conversations that this was not necessarily the case. “I learned how wrong it was to see with bias —that it was important to talk to people to understand a place,” she said. On one occasion, she was met with hostility by a man who she encountered. Another man, upon witnessing this, commented, “It’s an awfully sad day when a lady can’t go out with her camera to make art.” Brodsky noted, “Their clothes were made of the same cloth but they were not —one was a bully, the other my hero.”

In sum, American Patriot is a photographer’s desire to better understand the political landscape through the lens of the American flag. From trinket to decoration to symbol, the flag illustrates the many ways patriotism is expressed and understood. “Whether you have one or 10 on your lawn, or none,” says Brodsky, “[the flag] is one of the few things that all Americans can identify with —we each see red, white, and blue as our own.”