Our relationship to the environment around us is continually evolving. Over long spans of time, people have developed more and more advanced methods of controlling the environment around us to the point that there are millions of people with little interaction with the "elements" of the physical world. Climate control of buildings, which keep entire skyscrapers within a range of a few degrees regardless of the season, is one simple example of the artificial environments we create. We have also long augmented our bodies, both to overcome physical disabilities and to push the boundaries of what our bodies can do.

This is the prompt from “The Augmented Body,” a recent project for juniors in the Design for Environments track at Carnegie Mellon University’s School of Design. Design for Environments, which became an official track at the School of Design in 2014, seeks to holistically design places that result in meaningful human experiences. Environments Designers bring an understanding of users and interactions that aids storytelling, usability, experience and the integration of technology into specific places.

Over the course of 7 days, students experimented with ways that they can change a person's relationship to their (natural) physical environment. The end result would be wearable, physical artifacts designed to impact the user’s senses through amplification, dampening, distortion, isolation, etc. The basis for this project drew inspiration from work Associate Professor Mark Baskinger and Assistant Professor Kyuha Shim assigned to Masters of Design students a few years ago.

“A key part of this project was to physically prototype ideas,” added Peters. “The most interesting conversations are always about unexpected discoveries that happen during physical prototyping.”

For this project, Elizabeth Han (BDes ’21) made a conceptual wearable to understand the senses that impact on our understanding of the environment. Her outcome was ‘‘The Hand,” an extended limb for your arm that changes your sense of equilibrium, touch, sound, and humidity.

“The biggest takeaway from this project was how there are so many invisible signals we take for granted,” said Han. “For example, when the tip of my glove grazed against the floor, I could feel the texture of the ground as if my own hand was touching it. I wouldn’t have known through sketches alone that this type of feeling – known as ‘phantom touch,’ as Daphne pointed out – even existed.”

While this project was a conceptual exploration of senses, Han found the exploratory process to be really helpful in recognizing sensory information as a design material.

“The project alone inspired real-life use cases I hadn’t considered before, such as a cane that holds sensory information about the environment for the blind, or enhancing non-visual senses in a virtual reality experience,” added Han.

Franklin Guttman’s (BDes ’21) take on the assignment focused on playing on the sensory expectations users build up over a lifetime of sensory experiences with different spaces.

“In this iteration specifically I was trying to subvert the established sensory expectation of a forest scene, one filled with warm colors and green/brown tones (Visual), specific scents like moss and dew (Smell), and sounds like trickling streams or crunching leaves (Audio),” said Guttman. “The wearable took the form of a mask which covered both the nose and eyes, obscuring and subverting the visual sense with a harsh, white, opaque paper and the smell sense with a chili powder capsule hidden underneath the nose. 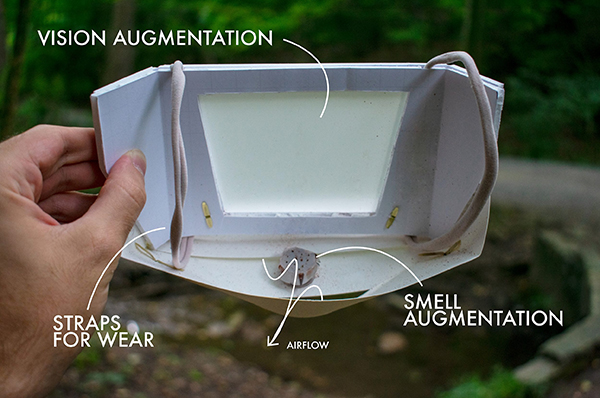 “These subversions ideally together create a sensory experience that is familiar (as your audio and touch sense are kept consistent with your expectations) but strange.”

Other projects included a set of lenses with various forms of distortion to allow someone to get “lost” in an urban park, a way to distort our understanding of where we are and where we’re going, ways of manipulating how our feet interact with the ground, and ways to augment our hearing and smell.

For students, unique projects like this really build on their education in Design for Environments.

“I think for me, like personally, I just like working without limitations,” said Guttman. “I didn't want to leave behind Product work or Communications work or Spatial/Experience Design work, and so Environments seemed like the track that would allow me to keep working with all these different things without limits.” 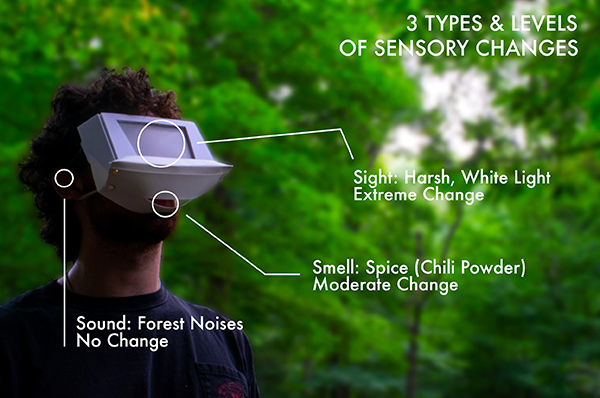 “I really enjoyed the projects in E Studio Mini, where we explored interactions in a hybrid environment,” continued Han. “I think the future of design lies in the intersection of digital and physical spaces, and I wanted to explore that further by choosing Environments as my track. I also thought the conversations in Environments were very valuable.

“It’s a special place where we think critically about interactions across time and space, dive into speculative designs, and ultimately become fluent with experimental processes.”

“Designing Environments at CMU is about designing human experiences,” added Peters. “Part of what these students are learning is that they can design a digital, hybrid, or physical environment that people inhabit, or interactions that mediate peoples’ experiences in the world.”

Learn more about Design for Environments at the School of Design >>