Man of the Cloth

“Just as a side note,” Joseph Genuardi says midway through his interview with the School of Design past Sunday, “there is an element to custom tailoring that’s highly sustainable.” This isn’t the only thing Joseph said that some may find surprising. In fact much of the way that Genuardi approaches the practice of designing custom tailored suits comes from his background in industrial design from Carnegie Mellon University’s School of Design. Although Genuardi departed from his field, he retains much of the iterative drafting and design thinking processes that were a part of daily life in the design studio at CMU. The School of Design sat down with Joseph Genuardi to learn more about how his practice evolved.

When Joseph Genuardi made a monumental career shift from engineering to custom tailoring he began by simply knocking on a door. The door in question was that of Joseph Centofanti, a renowned tailor in with a shop in Ardmore, Pennsylvania. Genuardi stopped by the shop on a Saturday, where Centofanti was busily working, and asked him directly if he would be open to taking him on as his apprentice. “It was a complete stroke of luck that he was willing to have me work with him,” said Genuardi.

After five years of devoted apprenticeship, Genuardi is now a Head Tailor at Martin Greenfield Clothiers in New York City. Throughout his final years at CMU he had an inkling that he’d like to work with clothing. “I really liked the idea that I could use the best materials and take more time and hone in on the nuances of a specific product and dive in. 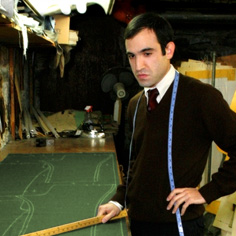 Genuardi currently works amidst a sea of swatches, patterns, and drafting tables, and still feels deeply connected to the process of sitting down to iterate and idea. “I actually still have my wooden stool from Sophomore Studio and I’m very proud of it,” continued Genuardi. “I just think that those early foundation classes in three-dimensional visualization were great exercises. Those gave us the most opportunity to practice skills and that to me is the most rewarding process.

“You get to really see yourself improve and it was basically the same way that I had to train to become a tailor; it was this long gradual course of refinement. When I think about design I think about the fundamentals, I think that no matter what field of design you are in, if you can focus on the fundamentals great things can happen.”

In fact, it was this passion for refinement that prompted Genuardi to make the career switch. “The whole time I was apprenticing it really felt like I was extracting all of the things about industrial design that I really loved, and I was able to focus on those things,” he added. “ This trade embodies all of the things I love about design, but departs from the things I wasn’t crazy about, especially mass production and changing things just because the market demands it. I didn’t like the idea of designing a new hairdryer just because the color was no longer in fashion, I know there’s a place for that but it wasn’t for me.”

Now the products that Genuardi makes last a lifetime, sometimes even more than one.

“My philosophy is that you are building something meant last. These suits will adorn for years and years and may be passed down through generations - it’s a point of pride and emphasis for me,” said Genuardi on the sustainability of his trade. ”People don’t think of it as environmentally friendly, it just happens that the underlying fundamentals embody some of those principles.”

There is also a sustainable aspect to the educational exchange from apprenticing.  While many students clamor for jobs in the tech industry, there is actually a growing market for more traditional trades.

“There are huge opportunities in this country and abroad for people to take up highly skilled trades whether in metalworking, woodworking, or tailoring,” said Genuardi.  “At the highest level in a lot of these trades there’s great demand and very little workforce, so not only is there a monetary opportunity there’s also time to delve into the craftsmanship of what they do to create beautiful things – sky is the limit in terms of how far you can go.”

The value of physical rendering that he gained from CMU deeply informed his ability to access this type of skill acquisition. Those beloved fundamentals from Sophomore studio aren’t tied to a particular market – the skills can be translated seamlessly from more traditional forms to contemporary contexts.

Now Genuardi is a key connector in passing down his skilled knowledge.  He has one apprentice currently, and starting tomorrow will have another whose background is also in engineering.  “I definitely feel a responsibility to perpetuating the trade, I was given such an opportunity and I feel I need to pass that on,” he said.  “To master something, you have to be your own conscience and you have to critique and regulate your own mistakes. No one was there with me in my parents’ basement, or here in my studio urging me to do better. There are many opportunities to stop and settle into one level or another of mastery, but then what? It’s asking yourself objectively, 'how can this be better?' Then taking it apart and re-stitching it, rehammering or drawing.

“Maybe that’s what I enjoy the most is not reinventing but refining.“

As current and former design students can attest, across all fields, the value of iteration is vital. In his studio today, Genuardi pours over the details of each suit, with complete focus and precision, the same way he did in room 107.