The MoonArk Headed to the Centre Pompidou

On January 18th, 2019, the MoonArk (@CMU_MoonArk) will be put on display at the Centre Pompidou as part of the Hors Pistes Festival, in Paris, France. The 14th edition of the multidisciplinary Hors Pistes Festival will focus exclusively on the Moon and its echoes in the field of cinema, contemporary art and thought.

The MoonArk is a massive collaborative and integrated project designed by a team of CMU faculty, students and a host of international collaborators over the past 10 years. Part of a larger Moon Arts research project in the Frank-Ratchye STUDIO for Creative Inquiry the MoonArk is an epochal project that blurs the boundaries between art, design, science and the humanities – a synthesis of research and practice that could only happen in a place like CMU. 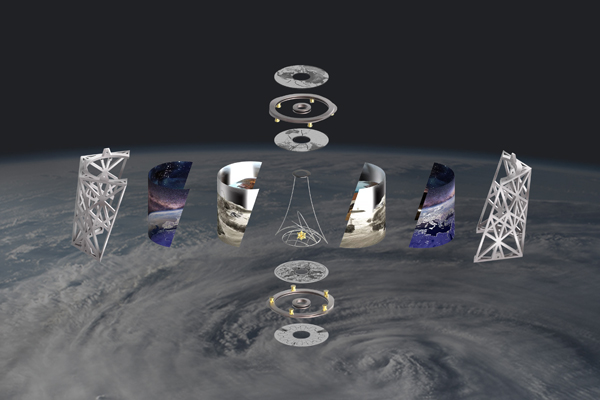 A cultural marker designed to last hundreds of thousands of years on the Moon, the MoonArk is envisioned to spark wonderment for future humans through poetically entangled visual narratives of the arts, humanities, sciences and technologies, the MoonArk will be the cultural payload on the first private delivery to the lunar service by Pittsburgh company and CMU spin-off, Astrobotic.

Comprised of four independent chambers and weighing a total of about 8 ounces, the MoonArk contains hundreds of images, poems, music, nano-objects, mechanisms and earthly samples intertwined through complex narratives that blur the boundaries between worlds seen and unseen. It is designed to direct our attention from the Earth outward, into the cosmos and beyond and reflects back to Earth as an endless dialogue that speaks to humanity's context within the universe.

Fabrication of the MoonArk has instigated original innovation and invention of digital fabrication techniques, ultra-high resolution imaging and many innovations in material science, technology and the arts. It has also engaged colleagues across the world. The project involves 12 units at CMU, 18 universities and organizations, 60 team members and more than 250 contributing artists, designers, educators, scientists, choreographers, poets, writers and musicians.

“We recognize that the MoonArk project is an important contemporary artwork exemplified by its many collaborations with over 250 prominent artists, musicians, scientists, technologists, writers, and designers who with contribution from corporations such as Astrobotic, Shinola, NASA, General Dynamics and Covestro have brought this first-of-its-kind international cultural artifact into reality,” said Géraldine Gomez, curator of the Hors Pistes exhibition at the Centre Pompidou. 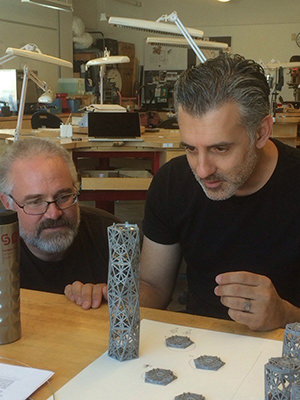 "This is an opportunity to take the arts and humanities into a realm that is traditionally thought of as cold and lifeless," said Lowry Burgess, renowned space artist, initiator of the Moon Arts project, Professor of Art at Carnegie Mellon University.

"This is truly a testament to human endeavor, persistence and faith,” added Mark Baskinger, Associate Professor in the School of Design and project director for the MoonArk.

“My hope is that the MoonArk raises conversation about humanity expanding outward into space, our attempts to communicate forward and the traces we leave behind,” said Baskinger. “We recognize other cultural markers in space, notably the Voyager Golden Record and the Long Now Rosetta Project, but there is no absolute model for doing this type of work; so for us everything is an experiment, a proposition, a first."

When the MoonArk heads to the Centre Pompidou, Baskinger and MoonArk project managers Associate Professor Dylan Vitone, and Assistant Teaching Professor Matt Zywica will be there for the unveiling.

“It’s incredibly exciting to show the MoonArk to a European audience,” added Vitone. “We’re extremely grateful for this opportunity to unveil the work of so many contributors."

For the team, the journey of the MoonArk is a testament to how design is taught at Carnegie Mellon University – thoughtful, propositional, catalytic.

“So many great ideas exist on this campus, but what you need is someone to enact them in a particular way that brings them together,” said Baskinger. “Designers prototype and learn to adapt to the language of artists, scientists, technologists and then facilitate meaningful conversations. There is so much interesting research happening on campus and a project like the MoonArk that brings so much of it into its own orbit shows how the arts can lead to new insights, new artifacts, new ways of exploring.”

“The sheer wealth and volume of thought and content that went into the MoonArk would have never come together into a cohesive whole without good design.”

Twin MoonArks have been created; one for the Moon, and one to remain here on Earth to travel across the world, aiming to reach millions of people through digital and print publications and curated exhibitions.

The MoonArk will be on display at the Centre Pompidou form January 18th through February 3rd.  It will continue to travel across the globe with a longer stop in Budapest in June through September, 2019, as it waits for the launch to the Moon in early 2021.

Learn more about the MoonArk >>

MoonArk To Be Unveiled at Thrival Festival