Designers solve problems. So when Laura West (ID ‘13) and Sophia Berman (ID ‘07) started working together, they decided to solve one of the world’s trickiest problems:

For the past 100 years, bras have been considered a fashion problem, not a design problem. “There is so much more to bras than just pretty aesthetics,” added West. “They’re an engineered product.”

Together Berman and West have developed a patent pending product that could revolutionize how larger busted women find support. “We have engineered support structure that replaces the typical underwire,” said Berman. “It really uses not just fashion, as typical bras do, but physics as well.

“We are approaching this from an engineering standpoint.” 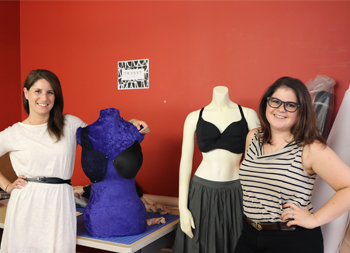 Hundreds of women signed on to their idea after hearing about the company on The Today Show and in Cosmopolitan. Last spring, the company ran a Kickstarter campaign looking to raise $25,000 to take their prototypes to production. They reached their goal within five days and, by the time the campaign ended, they had raised more than three times their goal. Since then, Trusst has added six new members to their team. In addition to current School of Design student intern Emily Mongilio, Trusst also employs Laine Mallet and Olga Pogoda, both alumnae from CMU’s Tepper School of Business, Kayla Geer, a CMU Mechanical Engineering alumna, and Alicia Pompei, a Communications Design (CD ’07) alumna.

West and Berman both credit the Industrial Design program with giving them the skills to make their business a success.  “CMU is a fantastic design school and definitely prepared me for this journey,” said West. “Part of my education was focused around prototyping and the iterative process.”

“That was a unique class that taught a lot about how to work in a normal work setting.”

The company has plans to integrate their technology into many products, not only active wear and lingerie, but also potentially for medical use. They aim to have their first collection ready for sale in Spring 2016.

Take a look at our entire interview with Laura West and Sophia Berman: