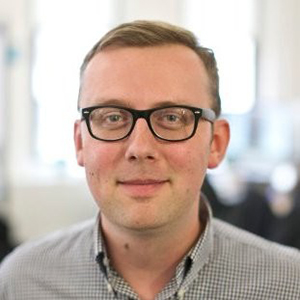 After a few years of battling cancer, Carnegie Mellon University's School of Design alumnus, Andrew Cramer (Andy), passed away on New Year’s Eve. He is survived by his wife and two young children. Andy called Pittsburgh home and had fond memories of his time at Carnegie Mellon University’s School of Design, where he earned his Master of Design (M.Des. ‘06). We remember Andy’s full, robust, and creative life. He had a successful career rooted in paving a path for designers to think critically, sensitively, and carefully regarding their role within organizations scoping projects and shaping industry standards, and, broadly, as humans in a changing world. Andy pushed industry standards in his capacity as a design leader at frog, SYPartners, and Fantasy. He led cutting edge projects that reframed design's capabilities and potential while remaining grounded in its limitations. Andy was always brimming with hope and approached the tensions of design’s limitations as an opportunity for growth, learning, and new ways of thinking. He worked with large corporations and nonprofits including Apple, UBS, American Express, The Rockefeller Foundation, and Equinox. Even as his career matured and progressed, his curiosity remained youthful, earnest, and steadfast. Andy was an excellent mentor and educator to emerging and young designers; he made room for young people in spaces to which he knew he had exclusive access. Andy was a Professor at New York University (NYU), Pratt Institute, Point Loma Nazarene University, and Seton Hill University. He also taught in Pittsburgh’s K-12 school system. Above all, Andy was a dedicated friend, brother, son, husband, and father. He will always be remembered (1980 – 2022).

In lieu of flowers, the family suggests that donations be made in Andy’s honor to International Justice Mission or that friends dedicate a NYC Parks tree or adopt a NYC bench in Andy's name.

Written and edited by Janice Cramer and Esther Kang