Students and Faculty Share their Research at Pittsburgh Maker’s Faire 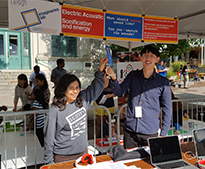 On October 14th and 15th, members of the Carnegie Mellon University Imaginaries Lab shared their ongoing research at Pittsburgh’s annual Maker Faire. The project, entitled "Electric Acoustic" and funded by a CFA Fund for Research & Creativity Award, explores the “sonification of energy use – turning data into sound.” Assistant Professor Dan Lockton, along with Devika Singh (MPS) and Shengzhi Wu (MDes), invited Faire attendees to try their prototype for “sketching” sound.

“At the Maker Faire, we were doing some exploratory research with people to understand how they think about energy, and what it might sound like if you could hear it," said Lockton. "We used some diagrams and videos created by Devika, together with an interactive set of prototypes created by Shengzhi, using Leap Motion controllers (a motion detection system) to enable people to 'sketch' the different sounds, with their hands. More than 100 people in total took part over two days, from young children to adult experts in technology.”

“The Maker Faire was like a pilot test for further research, so it was great to get responses, ideas and suggestions from a gamut of people," added Singh. "It was especially fun to watch children react and engage with different kinds of technology.” 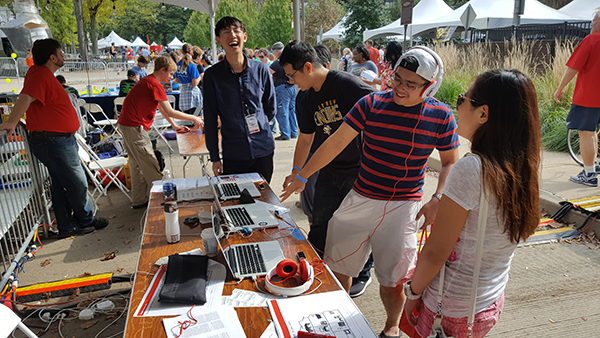 The project will lead to an installation at CMU in the spring in which a building on campus will be outfitted to allow visitors to hear its energy usage. The team hopes that by rendering audible the otherwise invisible processes of energy consumption, the installation might raise awareness and encourage further thought. “Hearing the data or energy is very different from seeing it, because it can happen without the user paying additional attention” said Wu.

When asked about the potential implications for the sonification process, Singh said “I think that a sonification interface could be a great way to communicate information qualitatively. Ambient sounds and music patterns can be a non-intrusive way to heighten the awareness or draw the attention of the user to something as compared to conveying information quantitatively on a screen-based device.”

To learn more about the Imaginaries Lab >>

School of Design Awards for Spring 2021
Top of Page