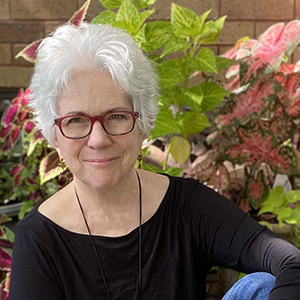 Professor Terry Irwin, Director of the Transition Design Institute at Carnegie Mellon University, was recently awarded the 2021 AIGA Medal in recognition of “her vision and enduring provocation to shape design education and philosophy through Transition design—the need for societal transitions toward more sustainable and plural futures.”

Irwin has been a member of AIGA since the late 1970’s, served on their national board of directors in the 1990’s, and also served on the medal committee three times - once having held the position as chair.

“I know first-hand how deeply considered this award is, so that makes it all the more meaningful to me,” says Irwin, “I was very honored and pleased.”

Irwin grew up in Phoenix, Arizona and began working full time directly after graduating high school. Her family was unable to afford to send her to college so she decided to work during the day and attend a local community college part time. She then transferred to a local university for night classes where she met one of the first people whom she credits her career to. “My first graphic design teacher, Thomas Detrie, is the one who changed the course of my life and career because he decided to go to graduate school and encouraged me to do the same.”

Several years later, Irwin was accepted to Basel School of Design in Switzerland. She “sold everything (she) owned, and moved to Switzerland in 1983, where (she) was able to study with some of the design ‘greats’ like Armin Hofmann, Wolfgang Weingart, Kurt Hauert and Andre Gürtler.” This was a pivotal milestone in her life that afforded her the opportunity to dive deeper into design while expanding her worldview and cultivating a network of friends and colleagues whom she still keeps in touch with today. “I think the most important thing I gained was a new perspective of my country, from outside it,” says Irwin.

After graduating from Basel and returning to the United States, Irwin co-founded MetaDesign in 1992, an international design firm with offices in Berlin, London, San Francisco and Zurich. She served as the Creative Director of the San Francisco office until 2002 and worked with Fortune 500 clients such as Nike, Apple, Hewlett-Packard, Barclay's Bank, Ernst and Young, Nissan, Sony, and Berlin's Transport company, BVG. Through this experience, Irwin says the most satisfying part was the incredible team of designers that she was able to work with, and through this she “learned a very important rule: always hire and try to work with people who are smarter and more talented than you are—that way you never stop learning.”

Irwin chose to leave MetaDesign in 2001 because (she had) “become disillusioned with design’s complicity in many environmental and social problems” and took some time to rest and reset. During this transitional period, she revisited a book titled The Web of Life by Fritjof Capra which inspired her to write him a letter. Capra responded to the letter and invited Irwin for lunch, which led to another pivotal milestone in her career. This meeting resulted in Irwin spending 3 weeks at Schumacher College in the southwest of England studying under Capra that summer. While there, she discovered that Schumacher offered a masters in Holistic Science and decided to apply. Once again, she sold all of her possessions in pursuit of this new academic venture.

While pursuing her masters in Holistic Science, she studied “ecology, Gaia, chaos and complexity theories, indigenous wisdom and systems thinking.” It was also where she met her husband and fellow CMU Professor and Associate Director of the Transition Design Institute, Gideon Kossoff. In 2007, the pair moved to Dundee, Scotland to pursue Doctoral Studies in Design and then in 2009 moved to Pittsburgh so that Terry could take a position as the Head of the School of Design at Carnegie Mellon University, where she led the launch of new design curricula in 2014.

“Mine has been a journey of going as deeply into design as is possible, then spending years pulling myself up and out of it, and that process led me to the study of systems and systems problems. And, I gained a new perspective of my discipline, from outside it,” says Irwin. “If there are any takeaways in all of this, it’s probably that stepping drastically and radically outside of your own country/discipline/context can be incredibly productive and rewarding. And, being willing to continually explore new territories with “’beginner's mind’ (especially as we get older) can give us an entirely new perspective on our own discipline and area of mastery.”

What’s next for Irwin? Her focus is to continue to be productive and engaged in meaningful work that contributes to something bigger than herself, continue to develop and evolve, and be willing to try new things, knowing that they will take years to master. With regards to the latter, Irwin believes that one of the “shortcomings in our modern society is that we want quick results,” and “we want to master things quickly.” She embraces and enjoys the process of “curiosity, passion, exploration, ineptitude (and sometimes despair), improvement and competence achieved over the long haul.” This mindset proves invaluable when thinking about Transition Design and tackling wicked problems.