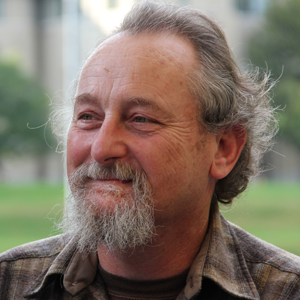 Merriman, who started working at the School of Design in 1985, teaches courses in furniture design, form generation, and prototyping. His primary interest is in the process of reconciling design intent with the constraints of materials and process in the generation of form.

“Tom Merriman is what I would call a master teacher,” said Terry Irwin, Head of the School of Design. “Someone whose knowledge in their field is so deeply embodied that it reflects in every aspect of their teaching and the way in which they live their lives. Tom’s relationship to the materials he teaches his students to understand and shape is absolute as is his bond with nature. Teaching the students to use tools and shape form is as much about ethics and mindfulness as it is designing products. He is what Richard Sennett calls ‘a craftsman’. And craftsmanship according to Sennett ‘names an enduring, basic human impulse, the desire to do a job well for its own sake.’ In an age of silo-ed disciplines, fragmentary knowledge, design-for-profit and a general unrootedness exacerbated by our obsession with the digital, Tom is a grounding force.”

“I help students develop their ideas by asking them questions,” said Merriman when asked about his philosophy on teaching Design. “I am excited about the subject matter of the courses I teach and I hope to convey that excitement to the students.

“All of the classes I teach have to do with developing a concept, defining its form and bringing it to realization,” continued Merriman. “How does a designer maintain their design intent as the form evolves in response to external constraints such as material and production limitations? This holds true whether you are shaping a piece of wood with a hand plane or creating a SolidWorks file to be 3D printed.”

Merriman went on to describe that the most gratifying thing about teaching for the School of Design is when alumni find positions as furniture designers.

“Everything he does is deeply connected to ‘place’ and he passes this concern on to his students,” added Irwin. “They walk in thinking they are going to learn to design/make furniture and they leave as craftsmen and women; some literally, some in their shift of mindset and posture. We will not see Tom’s like again.”

More info on the Teaching Awards >>