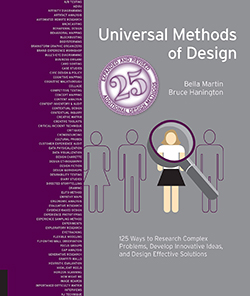 According to Hanington, the idea for the original book came from Martin’s thesis project, which was about “giving people a manageable set and understanding of research methods for human-centered design”. She produced a handbook that contained cards, decision wheels and other interactive components, and had a strong desire to keep the idea alive after graduating from CMU.

“This book is the book I wish I would have had when I started my career as a researcher,” said Martin.

“During one of our discussions, Bruce introduced me to Universal Principles of Design by Will Lidwell, and I thought to myself, ‘imagine a book of 100 methods….’ A few weeks later, I blogged about Universal Principles and Will saw my post and reached out to me,” added Martin. “I took the opportunity to tell him about my book idea, and he set up a meeting with the editor at Rockport to introduce Bruce and I. The rest, as they say, is history.”

On collaborating with Martin, Hanington said, “She and I worked well coauthoring because she always kept an eye out for applications that were accessible to design practitioners and project stakeholders and I always had an eye out for making the book accessible and appealing to design researchers, academics, instructors, and students.”

Martin explains that the industry has changed tremendously since the original book’s release in 2012.

“Bruce and I knew that if we had the opportunity to do an expanded edition, there would be so much inspiration coming out of the School of Design to help us include new methodologies.”

“The approach we took this time, that differentiates it from the approach we took for the first book, was that for the additional 25 chapters we asked people who were expert in certain methods and approaches that we thought would be interesting and unique to have featured in the book,” added Hanington. “Contributors such as Terry Irwin and Gideon Kossoff, Stuart Candy, Dan Lockton, Stacie Rohrbach, along with PhD candidates: Marysol Ortega Pallanez, Sofía Bosch Gomez, and Francis Carter provided their expertise in certain methods or provided case studies. It became this collaborative effort that allowed us to call on people with unique expertise.”

The updated book not only contains additional research methods, but also touches upon broad approaches to design such as transition design, behavior design, and futuring. Hanington reflects on the opportunity that came from the process, stating that “calling on these experts, you are not going to find some of these approaches in a lot of other research methods books.” When comparing the updated version to the original 100 methods, Hanington said, “It is indicative of the evolution of design, and the more widespread applications of design and its potential across disciplines going from sets of methods to actual approaches to design that can be used by other professions.”

“It’s always been my hope that designers will benefit from having a copy of Universal Methods of Design within reach, as it can help them to pick the right research methods for their projects, and also help them to determine whether it will be a good fit for their particular design culture,” said Martin.

Martin also believes that this book can a helpful tool for non-designers.

“We really want Universal Methods of Design to be used in a way that helps to build bridges with anyone who is new to user-centered research, including non-designers,” said Martin. “The distilled method explanations and references, paired with the visualizations accompanying each method, serves as a way to clarify and simplify research, in a way that helps people see that research doesn’t have to be complicated, time-consuming, or cost-prohibitive.”