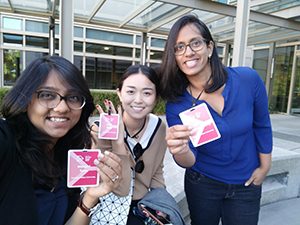 When Microsoft launched its first Design Expo in 2003, design was emerging as a ubiquitous element of digital technology and everyday life. Designers of the early two-thousands were reimagining experiences and products that consumers today use daily. This includes things like the first megapixel camera phone, the iTunes Music Store and the newly minted twenty-dollar bill.

As design continued to infiltrate across disciplines, Microsoft looked to facilitate long-term relationships with top design schools by sponsoring semester-long design challenges and hosting an annual expo to present the best work. Each year, students are asked to tackle a brief that centers on imminent themes, such as inclusive design, “Internet of Things” technology and conversational User Interfaces.

Since the first Design Expo, Carnegie Mellon University’s School of Design has been invited to work with Microsoft to solve these complex, real-world problems using design. In the spring of 2017, Master of Design students in the combined Graduate Design Studio II and Research Methods for Design course were tasked to create positive cultural impact in Mixed Reality.

The goal of the 2017 Microsoft Design Challenge goal was to "design a product, service or solution that demonstrates the value and differentiation of Mixed Reality." Microsoft added that creations should demonstrate the best qualities of a Mixed Reality experience that takes into consideration the environment, objects and people that will be participating in a teams' solution.

Under the guidance of Design faculty Peter Scupelli and Bruce Hanington, four student teams spent the semester creating mixed reality solutions, ranging from memory training for seniors and communication tools for far-away families, to professional training and language acquisition. All of the teams were able to utilize the Microsoft HoloLens to test, prototype and experience their ideas first-hand.

At the close of the semester, Manya Krishnaswamy (MDes '18), Leah (Ling) Jiang (MDes '18), Hannah Rosenfeld (MPS '17) and Manjari Sahu (MPS '17) were selected to present their idea at the Microsoft Design Expo in Redmond, Washington. Their project, Dash, was designed to help drive the future of automotive training. Dash is an educational platform that integrates contextually relevant information into dynamic Mixed Reality environments that promote critical problem solving and data driven learning in automotive repair.

At the start of the project, the team brainstormed a range of opportunity areas and settled on education as a shared interest. They discussed the increase in distance learning  and considered how Mixed Reality could make education more inclusive for non-college bound students. From there they dove into exploratory research in the Pittsburgh area, settling on a local automotive school, Rosedale Technical College. 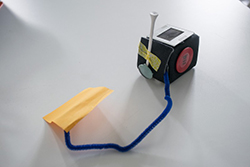 “When we were doing our research at Rosedale Technical College, we found that mechanics and instructors were using totally disparate information sources,” said team member Manya Krishnaswamy. “They also talked a lot about the increasing complexity of cars and the technology embedded in them.”

After Manya, Leah, Hannah and Manjari completed their Exploratory Research, they moved on to the next phase of the design process, Generative Research. In this case, the team began planning co-design workshops with Rosedale students and instructors that they had developed relationships with during their research.

Over the course of the project, the CMU team made 16 visits to Rosedale Technical College, conducted 21 interviews and developed 40 prototypes in order to begin developing a solution that addressed the needs of their users.

“The team at Rosedale is very keen on bringing Dash to fruition, and really see the value it can bring to their work," added Krishnaswamy.

As design continues to play a burgeoning role in technology and social society, Carnegie Mellon Design students are ready to take on the next big challenge and are already preparing what’ they will bring to the table at the next Microsoft Design Expo in 2018.

Please join us for another edition of our Design Lecture Series with Deroy Peraza and his lecture "Branding Pete 2020" on March 8, 2021 at 12pm.